What is Retainer Medicine? 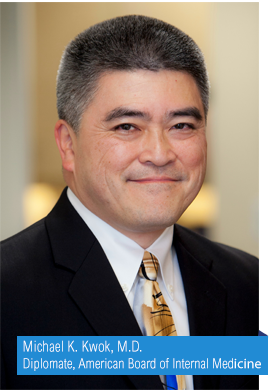 Dr. Kwok grew up in San Francisco and graduated from

He graduated with high honors from the

Berkeley with a Bachelor of Science in Chemical Engineering. He earned his medical degree from UCLA School of Medicine and completed his Internal Medicine Internship and Residency at Harbor-UCLA Medical Center.  He is board certified in Internal Medicine.

Dr. Kwok has practiced medicine in Marin County since 1992 and is a member of the active medical staff at Marin General Hospital and Novato Community Hospital.  In addition to taking care of his patients in his office and at Marin General Hospital, Dr. Kwok has held multiple medical leadership positions.  At Novato Community Hospital, he served as Vice Chief of Staff, Secretary/Treasurer of the Medical Staff, Chairman of Pharmacy and Therapeutics Committee and a member of the Quality Review Committee.  He previously served nine years on Novato Community Hospital’s Board of Directors.  He is President-elect of the Marin County Medical Society and represents Marin County at the California Medical Association House of Delegates.  Dr. Kwok currently serves on the Strategic Planning Committee of Marin General Hospital’s Board of Directors.

As part of his commitment to quality, devoted care, Dr. Kwok’s boutique medical practice is dedicated to offering you unlimited access to your doctor. We reject the idea of doctor’s appointments that are mere minutes and long waits for an appointment. If you are unfamiliar with the terms, concierge medicine or retainer medicine, we invite you to learn more by visiting our webpage, “What is retainer medicine?”